Hearing from the Oil Sands

The oil sands are a significant part of Alberta and Canada economy, but are also connected to the issue of climate change. 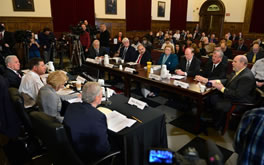 The oil sands are an important part of Alberta and Canada’s economy, and provide energy both domestically and internationally. They are also increasingly becoming a source of controversy. On the one hand, by some measures the oil sands comprise two percent of the Canadian economy. On the other hand, climate change (a phenomenon that is attributed largely to fossil fuel use) can have negative economic impacts —the 2013 Calgary floods alone cost $5 billion. The price of oil also casts a cloud over oil sands development. The huge amounts of investment needed to start and develop projects in the oil sands will not make sense if prices for the final product do not justify the costs.

What if a certain project is opposed? Consultations and negotiations happen, but if they fail, who decides whether it will go ahead?

This is the simulation that you will go through. Taking on the role of a key stakeholder, you will be part of a simulated Alberta Energy Regulator (AER) hearing. The names are fictitious, but the situation is realistic. The HDC Oil Company has proposed the development of the Spruce Divide oil sands project. You and your class will decide the fate of this project.